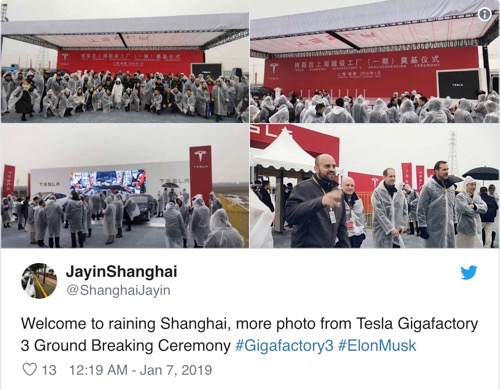 1/ He’s doing it again, in China! First crowd pictures I’ve seen, gives you an idea of how much was invested in the groundbreaking. Pattern: use Tesla’s image to descend on unsophisticated polity, offer local pols trade of PR for PR.

4/ ..for Potemkin solar roof tile installations. No volume installs because can’t be done profitably. Even if it were possible, it would take years and $billions to get there, so it’s all being sent to the memory hole where other Elon failed promises go.

5/ Scandal followed, pols convicted in bribery schemes related to the Cuomo’s NY agency: “Alain E. Kaloyeros.. was convicted on Thursday in a bid-rigging scheme that steered $100s of millions… to favored companies in Buffalo” bloomberg.com/news/features/…

6/ Musk has NEVER visited the plant. The $billions spent on it served their purpose: several hype cycles and the Solar City bailout that let him soak Tesla investors to save himself and cousins huge losses when Solar City was near failure.

7/ Gigafactory 3: Shanghai! Shrouded in secrecy on details, groundbreaking timed to assist current pump needs. Local pols may indeed be pushing banks to loan money for building (easily repurposed or de facto expropriated). The capital required to tool up is much larger.

8/ By starting construction of *something* the timeline for reckoning is advanced a year. By the time a shell is up and running, Tesla may have found the capital to equip it, in some unlikely scenario where there’s huge demand in China…

9/ China’s market as we speak is slowing. Expensive products are failing to sell. Small, affordable EVs with 100-km range are what China needs in volume, and Chinese companies will supply them. Foreign status brands are out of style.

10/ $tsla has never shown the ability to mass-produce cars *in lower price tiers* in volume. Musk tried and failed with the Mod3 in the US. His bet on all-automated lines was disastrous and wasted $100s of millions.

11/ The extend-and-pretend, hype-and-raise cycles worked before. Can he do it again and make it through another year? Maybe. The damage done grows each cycle. The runway is ending ahead, as lawsuits and investigations quietly churn away. /end

More on solar and Tesla topics:

The Story of Solar City’s Takeover.

Rooftop Solar: Trendy Boondoggle or The Future of Power?